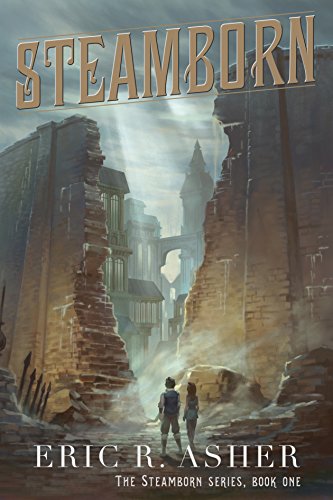 A supernatural swarm. A treacherous scheme. A tinker’s apprentice may be the village’s only hope…

Jacob has yet to meet a gadget he couldn’t fix or an adventure he could resist. With trade routes to his remote Lowlands town cut off, Jacob must exchange his boyhood adventures for petty theft. After all, his wages at the tinker shop aren’t enough to pay for his father’s medicine.

But it soon becomes clear why few merchants brave the nearby roads as a plague of terrifying creatures descends upon the town. With the Lowlands under siege, Jacob and his friend have no choice but to run for their lives. When their escape uncovers a terrible secret, Jacob learns there are those who’ll stop at nothing to make sure the teen takes the scandal to his grave…

Steamborn is an inventive YA fantasy novel with a heavy dash of steampunk. If you like dystopian settings, killer insects, and resourceful characters, then you’ll love Eric Asher’s gear-turning tale.

Buy Steamborn to crank up a whimsical thrill-ride today!

Enjoy reading Steamborn? You may also like these books