Funny books for boys 9-12 : 'Game On Boys! The PlayStation Play-offs': A Hilarious adventure for children 9-12 with illustrations.

By title
Funny books for boys 9-12 : 'Game On Boys! The PlayStation Play-offs': A Hilarious adventure for children 9-12 with illustrations.
By author
Kate Cullen
By publisher
Kate Cullen
Format
Other Formats & Editions
? 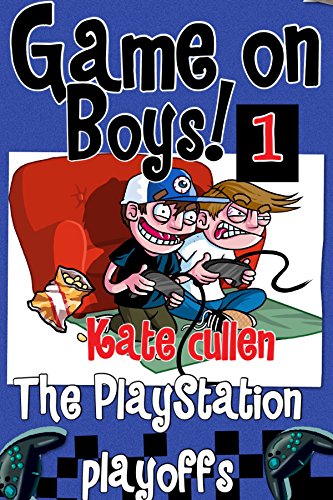 Funny books for boys 9-12 : 'Game On Boys! The PlayStation Play-offs': A Hilarious adventure for children 9-12 with illustrations.

language (Kate Cullen May 2, 2014) , 1 edition
Game on Boys is a hilarious adventure story for boys and girls that will get you laughing hysterically until your guts explode. Just make sure your Mom doesn't have to clean it up and keep the dog away.

Rino James is addicted to Minecraft, PlayStation and anything that looks like a computer game. He goes to a cool school, has a cool teacher and a very uncool sister who does everything in her pink power to ruin his fun.

When Ryan's teacher, with the very unfortunate name of Mr Higginbottom introduces a Play Station competition at school, everyone in the fifth grade goes into a crazy frenzy as they battle their way to win the prize. With Ryan's cool gaming record he's a sure fire thing to win until something disastrously ugly happens to cause his plans of victory to come tumbling to the ground faster than super sonic radar doing a bungee jump with a triple somersault back flip on the way. SPLAT !!%**$

Will it all end badly, and will Ryan's reputation change from being the coolest gamer to the biggest loser wearing splatted egg on his face, or can super dooper good things come out of really horrid bad things?
The ending comes with a super twist, spiral somersault, cowerbunga flip that you would never see coming.

With heaps of school yard humor and funny illustrations, this book is sure to get you away from your consoles for awhile.
Anyone who loves computer games and loves 'Wimpy kid' books will enjoy this hilarious, action filled adventure.

Enthralling, hilarious, and unpredictable, the Game on Boys series is designed to appeal to the heart of any boy or girl. Read it aloud to your children and they won’t want to put the book down; a great inspiration to continue to build reading confidence on their own!

The Game on Boys books can be read in any order, and are equally loved by boys, girls and grown-ups as well. Game on Boys 1, 2, 3, 4 and 5 available now on kindle or paperback.
Checkout DIARY OF A WICKEDLY COOL WITCH 1, 2 and 3 also for more laughs.

Enjoy reading Funny books for boys 9-12 : 'Game On Boys! The PlayStation Play-offs': A Hilarious adventure for children 9-12 with illustrations.? You may also like these books