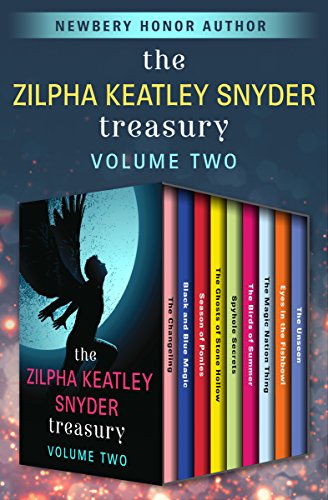 eBook (Open Road Media Teen & Tween Dec. 19, 2017)
Nine novels—including The Changeling—from the three-time Newbery Honor author who “led young readers into the wondrous terrain between fantasy and reality” (The Washington Post). Blending realism and fantasy, Zilpha Keatley Snyder was a master at drawing young readers into mesmerizing worlds. Collected in one volume, here are nine of her most memorable and beloved novels. One of her best-known books, the Christopher Medal winner The Changeling, follows an unusual friendship between two suburban girls, one of whom may have supernatural abilities. Snyder’s debut novel, Season of Ponies, is a mystical fairy tale about a girl, a magic amulet, and one unforgettable summer. Take a journey through such extraordinary settings as a rumor-haunted valley in The Ghosts of Stone Hollow and a possessed department store in Eyes in the Fishbowl. Meet a girl who spies on a neighboring family to overcome her own grief in Spyhole Secrets and another who discovers she has inherited psychic power in The Magic Nation Thing. With stories and characters that continue to endure, Zilpha Keatley Snyder is one of the most revered figures in children’s literature. This ebook includes The Changeling, Black and Blue Magic, Season of Ponies, The Ghosts of Stone Hollow, Spyhole Secrets, The Birds of Summer, The Magic Nation Thing, Eyes in the Fishbowl, and The Unseen.

Enjoy reading The Zilpha Keatley Snyder Treasury Volume Two? You may also like these books