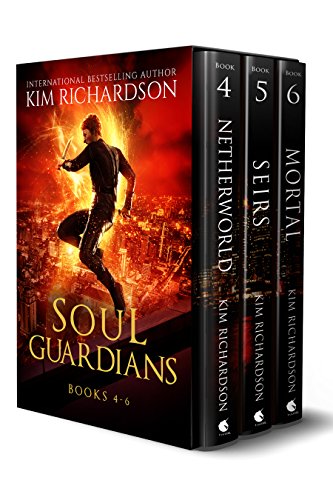 language (FablePrint Jan. 9, 2014)
Grab the next three books in the Soul Guardians series and save 20%. From the award-winning author comes a gripping, supernatural adventure that will keep you on the edge of your seat.

NETHERWORLD (Book 4)
Kara had only just begun to enjoy her life as a mortal with David—when they are pulled back suddenly into the world of the supernatural. The Legion has made an important discovery: a new Elemental child, whose whereabouts are unknown. Kara immediately prepares herself for battle, and comes face to face with the evil Seirs—a group of mortals devoted to the Netherworld. What’s worse, someone close to her is taken. Kara and her friends embark on another dangerous journey to seek out this child. But is this kid really an Elemental—or something else entirely?

SEIRS (Book 5)
Having just accomplished her last mission, Kara learns that the evil Seirs are slaughtering Sensitives that refuse to swear an allegiance to Lilith—the Netherworld’s princess and her diabolical half-sister. While on assignment, Kara discovers that Lilith is searching for an ancient weapon that can destroy mankind. With the help of her friends, Kara finds herself on another dangerous mission entrusted to her. But can Kara find the weapon before Lilith annihilates the entire human race?

MORTAL (Book 6)
As Kara settles back into the world of the living, she gets an unexpected surprise and finds herself back in Horizon—the Legion has given her a second chance. Kara and her friends face a new enemy: a Dark warlock, an ancient and evil adversary of the Legion. But when Kara finds out that their GA weapons have no effect on Dark magic, can she defeat the warlock and save the mortal world from Darkness? What’s worse, the Legion orders Kara to carry out her new mission undercover, as someone she never expected…

Enjoy reading The Soul Guardians Series: Books 4-6? You may also like these books