The Penelopiad: The Myth of Penelope and Odysseus

By title
The Penelopiad: The Myth of Penelope and Odysseus
By author
Margaret Atwood
By publisher
Knopf Canada
Format
Other Formats & Editions
? 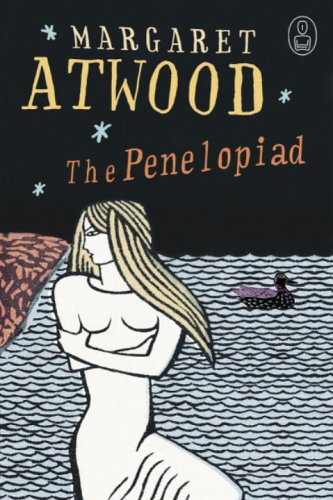 The Penelopiad: The Myth of Penelope and Odysseus

Hardcover (Knopf Canada Oct. 11, 2005) , First Edition edition
The internationally acclaimed Myths series brings together some of the finest writers of our time to provide a contemporary take on some of our most enduring stories. Here, the timeless and universal tales that reflect and shape our lives–mirroring our fears and desires, helping us make sense of the world–are revisited, updated, and made new.Margaret Atwood’s Penelopiad is a sharp, brilliant and tender revision of a story at the heart of our culture: the myths about Penelope and Odysseus. In Homer’s familiar version, The Odyssey, Penelope is portrayed as the quintessential faithful wife. Left alone for twenty years when Odysseus goes to fight in the Trojan Wars, she manages to maintain the kingdom of Ithaca, bring up her wayward son and, in the face of scandalous rumours, keep over a hundred suitors at bay. When Odysseus finally comes home after enduring hardships, overcoming monsters and sleeping with goddesses, he kills Penelope’s suitors and–curiously–twelve of her maids.In Homer the hanging of the maids merits only a fleeting though poignant mention, but Atwood comments in her introduction that she has always been haunted by those deaths. The Penelopiad, she adds, begins with two questions: what led to the hanging of the maids, and what was Penelope really up to? In the book, these subjects are explored by Penelope herself–telling the story from Hades — the Greek afterworld - in wry, sometimes acid tones. But Penelope’s maids also figure as a singing and dancing chorus (and chorus line), commenting on the action in poems, songs, an anthropology lecture and even a videotaped trial. The Penelopiad does several dazzling things at once. First, it delves into a moment of casual brutality and reveals all that the act contains: a practice of sexual violence and gender prejudice our society has not outgrown. But it is also a daring interrogation of Homer’s poem, and its counter-narratives — which draw on mythic material not used by Homer - cleverly unbalance the original. This is the case throughout, from the unsettling questions that drive Penelope’s tale forward, to more comic doubts about some of The Odyssey’s most famous episodes. (“Odysseus had been in a fight with a giant one-eyed Cyclops, said some; no, it was only a one-eyed tavern keeper, said another, and the fight was over non-payment of the bill.”)In fact, The Penelopiad weaves and unweaves the texture of The Odyssey in several searching ways. The Odyssey was originally a set of songs, for example; the new version’s ballads and idylls complement and clash with the original. Thinking more about theme, the maids’ voices add a new and unsettling complex of emotions that is missing from Homer. The Penelopiad takes what was marginal and brings it to the centre, where one can see its full complexity. The same goes for its heroine. Penelope is an important figure in our literary culture, but we have seldom heard her speak for herself. Her sometimes scathing comments in The Penelopiad (about her cousin, Helen of Troy, for example) make us think of Penelope differently – and the way she talks about the twenty-first century, which she observes from Hades, makes us see ourselves anew too. Margaret Atwood is an astonishing storyteller, and The Penelopiad is, most of all, a haunting and deeply entertaining story. This book plumbs murder and memory, guilt and deceit, in a wise and passionate manner. At time hilarious and at times deeply thought-provoking, it is very much a Myth for our times.

Enjoy reading The Penelopiad: The Myth of Penelope and Odysseus? You may also like these books