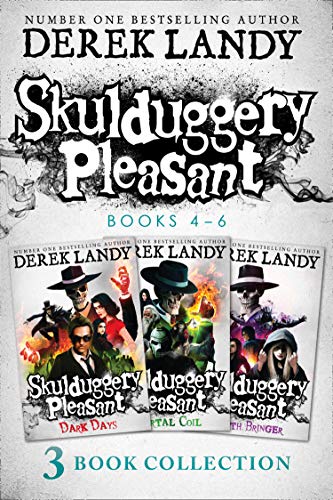 Together for the first time, books 4, 5 and 6 in the Skulduggery Pleasant – the biggest, funniest, most thrilling comedy-horror-adventure series in the universe! From number-one-bestselling author Derek Landy.

Book 4: DARK DAYS. Skulduggery pleasant is gone, sucked into a parallel dimension. There is no official, Sanctuary-approved plan to save him. But Valkyrie’s never had much time for plans…

Book 5: MORTAL COIL. With Valkyrie struggling to protect her dark secret, Skulduggery and the gang are more vulnerable than ever, just as a plague of body-snatching Remnants are released upon the world…

Book 6: DEATH BRINGER. The Death Bringer has risen. Skulduggery and Valkyrie have seven days to uncover the Necromancers’ secret before it’s too late. The clock is ticking. Lord Vile is loose. And after this one, nothing will ever be the same again.

Enjoy reading Skulduggery Pleasant: Books 4 - 6? You may also like these books