Young Taliya: The Unusual Childhood Adventures of the Dragon Protector 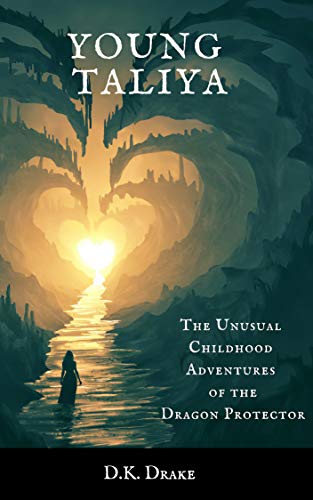 Young Taliya: The Unusual Childhood Adventures of the Dragon Protector

language (Dream Doers Publishing LLC Oct. 9, 2017)
An action-packed quick read that is as short and sassy as the character herself.

“I had to glue her mouth shut again.”
At the sound of her mother Lily’s voice, Taliya jerked to attention from her hidden spot in the loft that overlooked the common room of the small home. Her parents didn’t often say much to each other. Her mother liked to sleep a lot while her father sat quietly in his chair by the fire reading book after book. So when they did talk, she paid attention, especially when they were talking about her.
Her father Hizel sighed. “I thought we agreed you weren’t going to do that anymore.”
“I had a headache and couldn’t bear listening to one more of her relentless questions.”
Taliya licked her lips. They were still raw from the sticky goo her mother had put on them earlier, but she had used her tongue and spit to free her lips hours ago. Maybe if someone would answer her questions, she wouldn’t keep asking them.
Quesions like why couldn’t she play outside? When could they take a trip beyond the city walls? Why was the city surrounded by walls and guards anyway?
And what about dragons? Would she ever get to see one? Did their scales really change colors when they got hungry? What Bloodline was she from? Would she ever find her own dragon to take care of? Could she enter the Battle of the Throne one day?
Taliya crawled on the splintery wood floor to the edge of the loft and watched her tall, muscular father shrug his shoulders and sit in his rocking chair by the fireplace. “She’s only four, Lily. She’s curious.”
“She’s exhausting.” Her mother’s tan cheeks were turning red as she marched across the room to stand in front of her father. She was barely taller than him even though he was sitting down. Taliya hoped that someday she would be as tall as her father, not as short as her mother.
“By the time I was her age,” Lily continued, “I had learned to keep my mouth closed and do what I was told. But your child is asking about traveling and dragons and what Bloodline she’s from and if she can compete in the Battle of the Throne. Those are dangerous questions to be asking!”
Hizel stopped rocking and stared at Lily. “What did you tell her?”
“Nothing. Of course I told her nothing.” She crossed her arms over her chest. “I can’t handle her anymore. I want to give her to the King’s Workhouse.”

So begins the childhood tales of Taliya, a Dragon Protector who makes her first appearance at the age of twenty-two in The Dragon Hunter, book two of The Dragon Stalker Bloodlines Saga.

But how did a Protector from the Land of Zandador end up in Keckrick hiding a Dawn Stalker? Why does she live alone? In a treehouse? Far away from any other people or villages?

How did she become known as a Healer? Where did she get all of her books? Why is a slingshot her weapon of choice?

Those questions and more are answered in this novella that begins with a four-year-old talkative Taliya and ends with a few scenes told from her perspective when she makes her first official appearance in chapter seventeen of The Dragon Hunter.

Enjoy reading Young Taliya: The Unusual Childhood Adventures of the Dragon Protector? You may also like these books