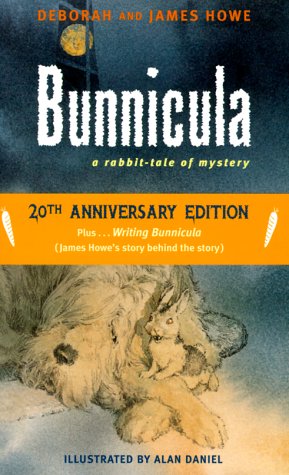 It all begins when the Monroes go to see the movie Dracula. At the theater, Toby finds something on his seat -- a baby rabbit, which he takes home and names Bunnicula. It proves to be an apt name, at least as far as Chester the cat is concerned. Well-read and observant, Chester soon decides that there is something odd about the newcomer. For one thing, he seems to have fangs. And the odd markings on his back took a bit like a cape. Furthermore, Bunnicula sleeps from sunup to sundown and is awake only at night.

Is Bunnicula really a vampire? Only Bunnicula knows for sure. But the story of Chester's suspicions and their consequences -- as told by his canine pal, Harold -- make uproarious reading.

Enjoy reading Bunnicula? You may also like these books