Ruby In Her Own Time

By title
Ruby In Her Own Time
By author
Jonathan Emmett
By publisher
Scholastic Inc.
By series
Scholastic Bookshelf
At
Level K
Format
Other Formats & Editions
K* 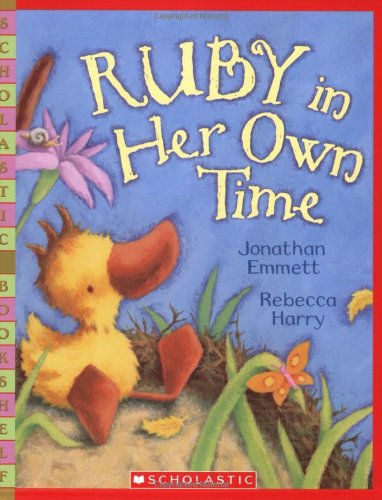 Ruby In Her Own Time

Mother Duck and Father Duck are worried about Ruby. As the littlest duckling of the family, she learns to eat and swim long after her four sisters and brothers. Father Duck frets that Ruby will never catch up, but Mother Duck calmly reassures him that Ruby will flourish -- "in her own time."
Readers of all ages who have ever felt like the biggest or the littlest, the slowest or the fastest, or somewhere in between, will root for Ruby as she takes wing toward independence, at last. Once you've met Ruby, you'll never forget her!

Enjoy reading Ruby In Her Own Time? You may also like these books