West of the Pecos: A Western Story

By title
West of the Pecos: A Western Story
By author
Zane Grey
By publisher
Skyhorse
Format
Other Formats & Editions
? 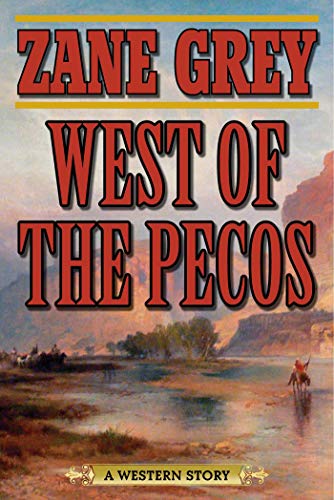 West of the Pecos: A Western Story

eBook (Skyhorse April 26, 2016)
From one of the bestselling western novelists of all time, comes another classic story.Templeton Lambeth had so desperately wanted a son an heir to ride by his side through the vast, wild ranges just west of the Pecos River. But to his disappointment, his wife bore a girl. His hopes crushed and in denial, he decides to raise his daughter as if she were a boy. In honor of Lambeth’s more successful brother, they named her: Terrill.Upon the arrival of the Civil War, Lambeth enlists in Lee’s army, leaving behind his wife and tomboy daughter, with hopes to reconcile living in the shadow of his brother. By the time the war ends, Lambeth returns a colonel and his wife has passed. Tired of his old life as a cotton planter, he packs up with his tomboy daughter, Rill, and heads for the alluring western frontier to start anew.After they arrive in the West, the Colonel is brutally murdered. Rill, disguised as a youth of eighteen who rode with the toughest, is left to fend for herself in the Wild West swarming with outlaws. Enter the one they called Pecos Smitha rugged desperado with a mysterious past and one bad reputation. Though, he may not be what he seems. Filled with adventure, bandits, and the beautiful landscape of America in its formative years, West of the Pecos is a classic tale by one of the greatest novelists of the American west.Skyhorse Publishing is proud to publish a broad range of books for readers interested in fiction that takes place in the old West. Westernsbooks about outlaws, sheriffs, chiefs and warriors, cowboys and Indiansare a genre in which we publish regularly. Our list includes international bestselling authors like Zane Gray and Louis L’Amour, and many more. While not every title we publish becomes a New York Times bestseller or a national bestseller, we are committed to books on subjects that are sometimes overlooked and to authors whose work might not otherwise find a home.

Enjoy reading West of the Pecos: A Western Story? You may also like these books