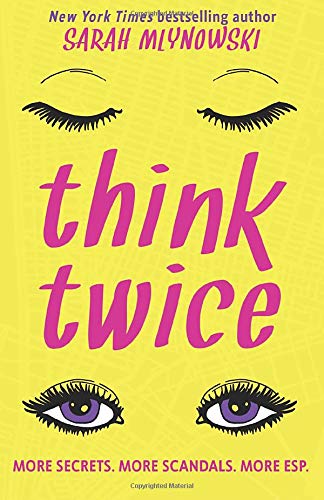 The long-awaited sequel to Don’t Even Think About It!

We used to be average New York City teenagers. Then, in tenth grade, we got flu shots and developed telepathy. Yes. Telepathy. We could read minds, and it wasn’t always pretty.

We tried to keep our ESP a secret, but the news spread until everyone knew about our special ability. Our teachers. Our friends. The New York Post. We became C-list celebrities. We even had our own groupies.

Now, it’s senior year, and with graduation around the corner we have plans—big plans—that involve being telepathic.

So when one by one we start to lose our ESP, we have to take action. Fast. With the class brainiac on our side, we should be able to save our telepathy before it’s too late. Right? Or will we have to learn how to survive without it once again?

Praise for Don’t Even Think About It

“I raced through this in just a couple of hours, so don’t even think about asking me if I loved it...of course I did!” – The Guardian

“A tour-de-force comic narration that will leave you gasping in awe—if you ever catch your breath from laughing.” —E. Lockhart, author of We Were Liars

“Hilarious, moving, and utterly ingenious.” —Robin Wasserman, author of The Book of Blood and Shadow and The Waking Dark

“Sarah Mlynowski does it again with a fresh, fun, and fabulous story filled with secrets, surprises, and a sixth sense. Don’t even THINK about passing up this hilarious read!” —Elizabeth Eulberg, author of The Lonely Hearts Club

“Finally, someone understands that if you develop powers as a teenager, it’s not the government you have to watch out for—it’s your best friends. Funny, realistic, heartfelt, satiric, and unpredictable.” —Ned Vizzini, New York Times bestselling author of It’s Kind of a Funny Story

Series
Don't Even Think About It (Book 2)

Enjoy reading Think Twice? You may also like these books