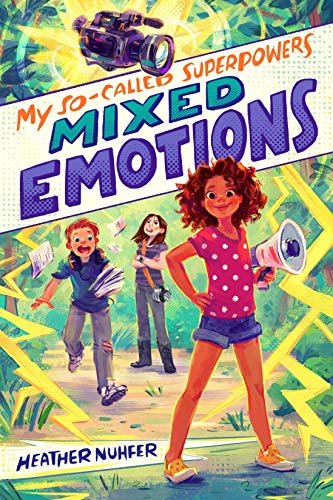 The second book in Heather Nuhfer's heartfelt, hilarious, and acclaimed My So-Called Superpowers series, illustrated by Simini Blocker, where middle-school student Veronica’s superpowers will ruin everything―if she doesn’t beat them to it.

Veronica has worked hard to get her feelings under control. Sure, sometimes a strong emotion turns into a superpower―giving her a personal raincloud on a bad day, or literally turning her green with envy. But it’s happening a lot less these days! Then she finds out what she’ll be doing at summer camp: directing her own movie with her best friend Charlie―and her best frenemy Becky.

At first it seems fun, until Veronica’s superpowers start affecting other people. When Veronica calls “Action!” everyone has to do what she says. But is that the best way to make her dream movie―or to treat her friends?

My So-Called Superpowers: Mixed Emotions raises the stakes on Veronica’s middle-school adventures, proving that her powers are both the best thing and the worst thing that’s ever happened to her.

Praise for My So-Called Superpowers:

“My So-Called Superpowers is vibrant, lively, and hums along at a snappy pace. It has a genuinely warm, welcoming Saturday-morning cartoon feeling to it.”―Tony Cliff, New York Times bestselling author of the Delilah Dirk series

“Readers will empathize with Veronica’s quest, and fall in love with this fun, heartwarming story about learning to embrace your individual quirks and the power of friendship.”―Rysa Walker, author of the bestselling CHRONOS Files series and the Delphi Trilogy

Enjoy reading My So-Called Superpowers: Mixed Emotions? You may also like these books