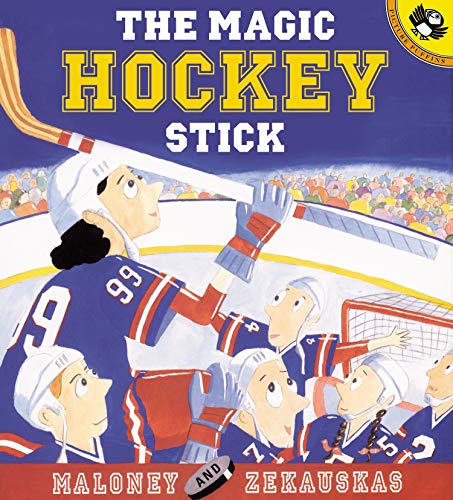 Paperback (Puffin Books Oct. 1, 2001) , Illustrated Edition
Inspired by a real event, this is the fictional tale of a little girlwhose parents win Wayne Gretzky's hockey stick at an auction. When thechild begins to play with it, she becomes her team's star. Meanwhile,"The Great One" goes into the greatest slump of his career. Realizing he needs the stick more than she does, the girl returns it to him, andGretzky gets over his thousand-goal hump.

Peter Maloney andFelicia Zekauskas really did win a Gretzky hockey stick at an auction,and The Great One subsequently did go into a slump. The authors haveturned their adventure into THE book for young sports fans, with cleverrhyming verse, witty pictures, and a heartfelt theme about what it means to give. They will donate a percentage of proceeds from this book tothe New York Presbyterian Hearst Burn Center for Pediatric Burn Care,which held the original auction.

American Bookseller made the duo's first book, Redbird at Rockefeller Center, a fall 1997 Pick of the Lists, and called it "reminiscent of Dr. Seuss classics." With The Magic Hockey Stick, they've done it again!

Enjoy reading The Magic Hockey Stick? You may also like these books