By title
Who Was P. T. Barnum?
By author
Kirsten Anderson Who HQ Stephen Marchesi
By publisher
Penguin Workshop
By series
Who Was?
At
Level U
Format
Other Formats & Editions
U 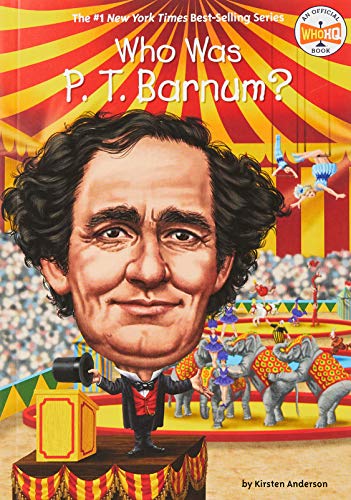 Paperback (Penguin Workshop June 4, 2019)
Ladies and Gentlemen, children of all ages, step right up for Who HQ's entertaining biography of P. T. Barnum: politician, businessman, and The Greatest Showman on Earth!

After moving from Connecticut to New York City in 1834, twenty-four-year-old Phineas Taylor Barnum launched his now-legendary career as a showman. Even though spectators debated whether his exhibitions were authentic wonders, hoaxes, or a little bit of both, they were always astounded by what they saw. And readers are sure to be amazed by the story of how Barnum went from owning a museum filled with rare and unusual items to transforming the American circus into a popular and thrilling phenomenon.

Enjoy reading Who Was P. T. Barnum?? You may also like these books