The Boy Who Drew Cats and Other Japanese Fairy Tales 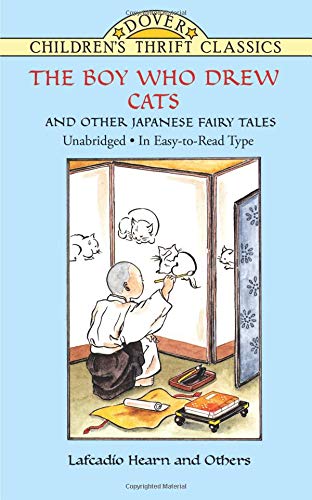 The Boy Who Drew Cats and Other Japanese Fairy Tales

Paperback (Dover Publications Feb. 29, 2012)
A talking tea kettle, a monstrous goblin-spider that lives in a haunted temple, miniature soldiers that plague a lazy young bride, and other fanciful creatures abound in this captivating collection of eleven Japanese fairy tales.
Youngsters are transported to an exotic, faraway world of samurai warriors, rice fields, humble cottages, and a magical spring in five tales excellently translated and adapted by noted writer and linguist Lafcadio Hearn: "The Fountain of Youth," "Chin-Chin Kobakama," "The Goblin-Spider," "The Old Woman Who Lost Her Dumplings," and the title story. Six additional stories — in versions by Grace James, Basil Hall Chamberlain, and other authorities on Japanese folklore — include "The Tea-Kettle," "The Wooden Bowl," "My Lord Bag-o'-Rice," "The Hare of Inaba," "The Silly Jelly-Fish," and "The Matsuyama Mirror."

Enjoy reading The Boy Who Drew Cats and Other Japanese Fairy Tales? You may also like these books