By title
When the Cheering Stopped: The Last Years of Woodrow Wilson
By author
Gene Smith
By publisher
Open Road Media
Format
Other Formats & Editions
? 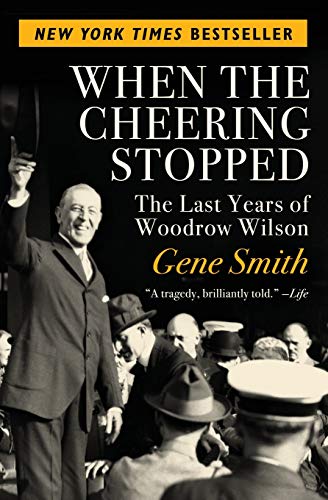 Paperback (Open Road Media Feb. 6, 2018)
The poignant true story of an American president struck by tragedy at the height of his glory. This New York Times bestseller vividly chronicles the stunning decline in Woodrow Wilson’s fortunes after World War I and draws back the curtain on one of the strangest episodes in the history of the American presidency. Author Gene Smith brilliantly captures the drama and excitement of Wilson’s efforts at the Paris Peace Conference to forge a lasting concord between enemies, and his remarkable coast-to-coast tour to sway national opinion in favor of the League of Nations. During this grueling jaunt across 8,000 miles in less than a month, Wilson suffered a debilitating stroke that left him an invalid and a recluse, shrouding his final years in office in shadow and mystery. In graceful and dramatic prose, Smith portrays a White House mired in secrets, with a commander in chief kept behind closed doors, unseen by anyone except his doctor and his devoted second wife, Edith Galt Wilson, a woman of strong will with less than an elementary school education who, for all intents and purposes, led the government of the most powerful nation in the world for two years. When the Cheering Stopped is a gripping true story of duty, courage, and deceit, and an unforgettable portrait of a visionary leader whose valiant struggle and tragic fall changed the course of world history.

Enjoy reading When the Cheering Stopped: The Last Years of Woodrow Wilson? You may also like these books