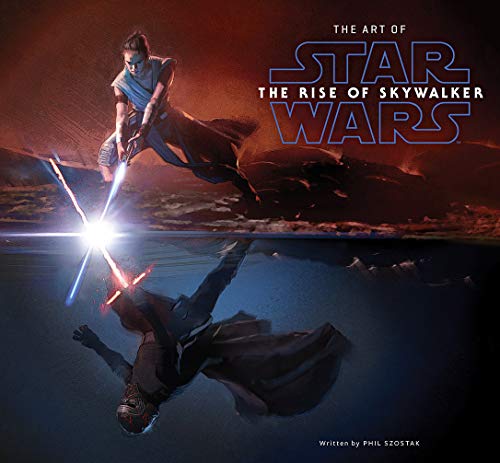 The Art of Star Wars: The Rise of Skywalker

Hardcover (March 31, 2020)
The official behind-the-scenes book of concept, production, and post-production art for Star Wars: The Rise of Skywalker. Go inside the creative process behind the most anticipated film of the century. The latest trilogy in the Star Wars film series brings the Skywalker Saga to a close and The Art of Star Wars: The Rise of Skywalker will take readers into the creative process behind visualizing the epic worlds, creatures, characters, costumes, weapons, and vehicles of the landmark conclusion more than … More
T* 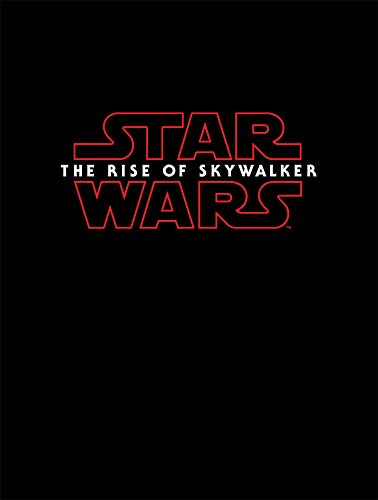 Paperback (Aug. 11, 2020)
The Rise of Skywalker is the newest Star Wars film to receive a graphic novel adaptation!Faithfully bringing events from the film to the comics page, read along in The Rise of Skywalker as Poe faces the challenges of leadership, Finn and Rose make impossible decisions for the greater good, and Rey finally confronts her destiny. The true threat to the galaxy is revealed as the third Star Wars trilogy reaches its epic conclusion!Will Rey join Kylo Ren to lead the … More
Q* 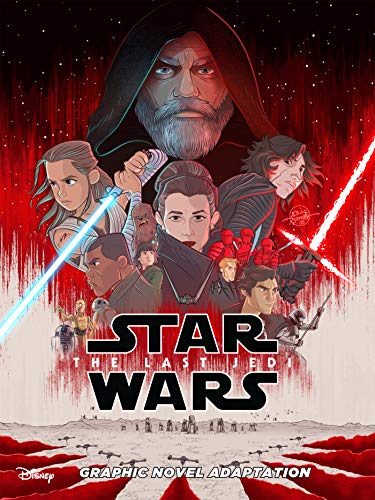 Paperback (Sept. 25, 2018)
The Last Jedi is the newest Star Wars graphic novel adaptation!Faithfully bringing events from the film to the comics page, read along in The Last Jedi as Rey and Finn stare down new challenges as their roles in the Resistance reach new heights. As new dangers approach and old threats emerge, the next generation of Star Wars heroes is here!What happens when Rey and Luke meet? Does Finn get a shot at Captain Phasma? Can Kylo Ren lure another powerful … More
Q* 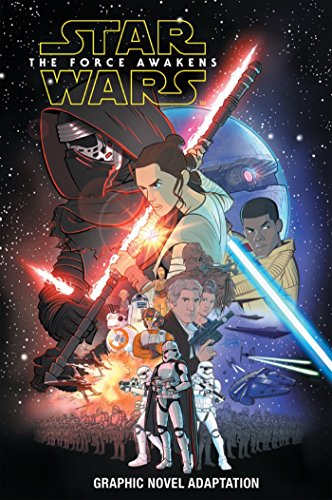 Paperback (Aug. 29, 2017)
A new Star Wars generation is born! Rey, Finn, and Kylo Ren meet for the first time in this children's comic adaptation of Episode VII.Faithfully capturing the galaxy-spanning action of The Force Awakens, join all your favorite characters, new and old, on the adventure of a lifetime! Experience Episode VII like never before and make your stand with the Resistance against the might of the First Order!This beautiful graphic novel combines the awe-inspiring wonder of Star Wars with the streamlined … More
Q* 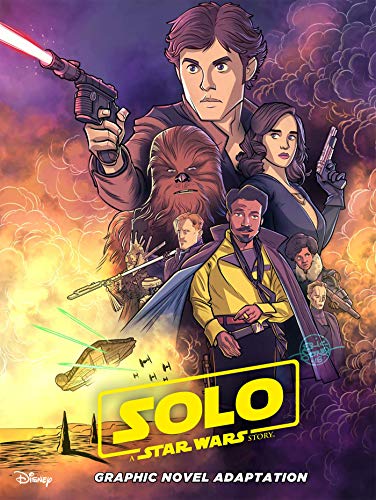 Paperback (March 26, 2019)
The official all-ages adaptation of SOLO: A Star Wars Story!There aren't many ways someone like Han, a young scrumrat raised in the streets of Corellia, can leave his planet and become a great pilot, and none of them are easy. But when Han finally makes it, it sets up a life-changing journey that will turn him, and his future co-pilot Chewbacca, into the most famous smugglers in the galaxy.Capturing the galaxy-spanning action of Solo, experience the movie as a beautiful … More
P*

Star Wars The Rise of Skywalker The Galactic Guide

Hardcover (Dec. 20, 2019)
Save the galaxy from the dark side!Packed with facts from Star Wars: The Rise of Skywalker, this book is perfect for young kids who want to join their heroes - Rey, Poe, and Finn - on their thrilling adventures in the galaxy far, far away....Discover more about the latest Resistance recruits, including historian Beaumont Kin and a cute droid named D-O. Find out how Rey has been training to become a stronger Jedi and what the heroes have been up … More
N* 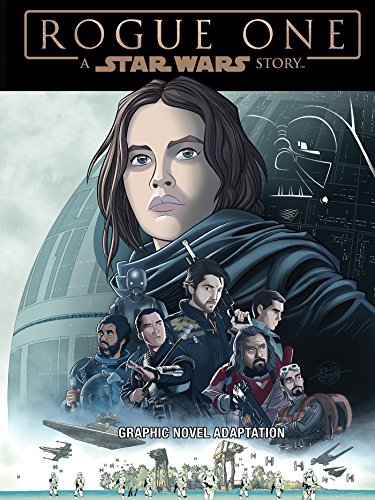 Paperback (Dec. 12, 2017)
The epic scope of Star Wars meets the signature style of Disney animation to deliver an entirely new experience for fans of the blockbuster film.The Death Star, the Empire's ultimate weapon, is nearing completion, and the Rebel Alliance may be doomed. Enter Jyn Erso, daughter of the Death Star's reluctant creator, who desperately seeks to save her father from Imperial control. On her quest, she'll join forces with Rebel spy Cassian Andor, reprogrammed Imperial droid K-2SO, and other supporters of … More
P* 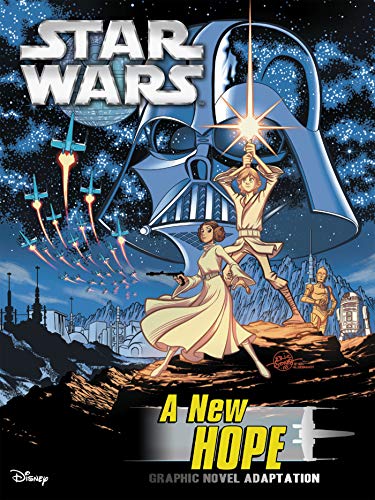 Paperback (Sept. 18, 2018)
Episode IV: A New Hope is the newest Star Wars graphic novel adaptation! Go back to where it all began with this new take on the classic story.Faithfully bringing events from the film to the comics page, read along as Luke Skywalker embarks on his destiny, Princess Leia confronts Darth Vader, and the Rebellion fights for the fate of the galaxy! The saga that has mesmerized us for more than 40 years begins again, right here!Capturing the galaxy-spanning action of … More
?

Star Wars: The Rise of Skywalker

Calendar (Sept. 27, 2019) , Wall Calendar edition
The monumental story of the Skywalker family has come to its epic conclusion, and now you can spend 2020 reliving the best moments from ninth and final installment in the Star Wars saga franchise. Bilingual English and Spanish. Sixteen-month wall calendars feature spacious grids for each month in 2020 as well as the last four months of 2019, printed on paper certified by the Forest Stewardship Council. More
R* 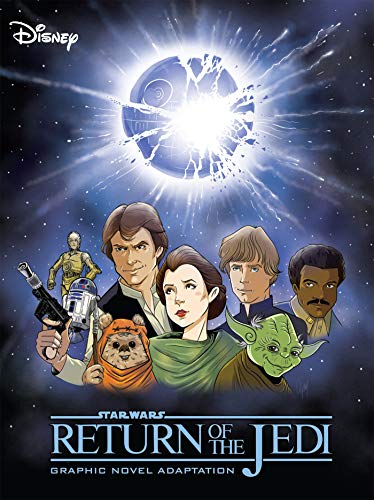 Paperback (Oct. 22, 2019)
The war between the Rebels and the Empire continues in this graphic novel adaptation perfect for younger readers!Crime lord Jabba the Hutt is holding Han Solo captive in his palace while the Emperor and Darth Vader plan to turn Luke Skywalker to the dark side while a new, even more powerful Death Star will be completed soon. Is the Rebellion about to be crushed once and for all?Like the other Star Wars Graphic Novel Adaptations, Return of the Jedi combines … More
? 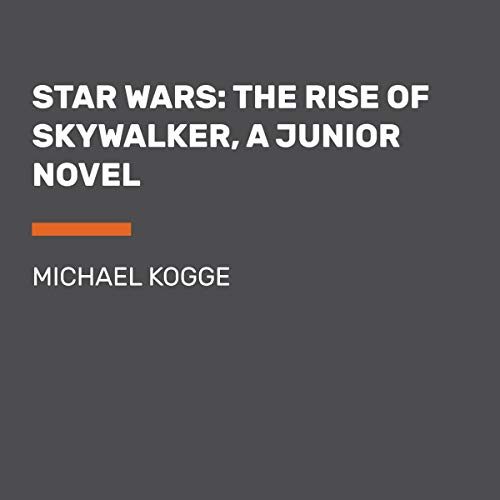 Star Wars: The Rise of Skywalker: A Junior Novel

Something has awakened. Every generation has a legend. Nobody's ever really gone.

The conclusion of the Skywalker Saga is finally here. This junior novel retelling of Star Wars: The Rise of Skywalker, contains deleted and extended scenes, including exclusive scenes you won't find anywhere else!

Paperback (April 21, 2020)
Something has awakened.Every generation has a legend.Nobody's every really gone. The conclusion of the Skywalker Saga is finally here. This junior novel retelling of Star Wars: The Rise of Skywalker, contains deleted and extended scenes, including exclusive scenes you won't find anywhere else! This book also includes an 8-page full-color insert. More
Find More in Readling App