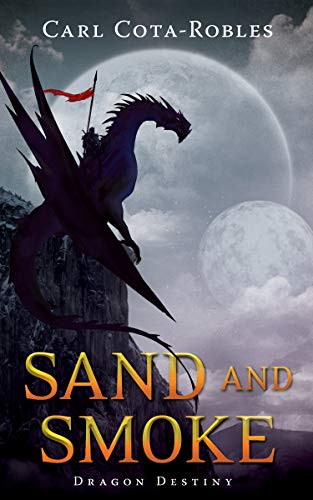 language ( Oct. 17, 2019)
Dragons soar, hopeful riders compete, and from across the desert comes news of a devastating weapon.

Al Hardin is a nomad with a secret. He has a second identity, and a second personality to boot. He calls that other side of him the Silver Bandana. He lives to save others from the gangs of cowboys who wouldn't think twice before putting a bullet in a person's head.

In his world, dragons are not an uncommon sight. They're called the Wesech dragons, and another breed, the magical Sun dragons, live far across the desert. The Sun dragons have bonded themselves to riders. They protect, in exchange for influencing the dragon riders, and their people, with peace.

But when a powerful weapon is built in the desert, disparate characters come together.

A hero made by the death of his mother. A bounty hunter with a sharpshooter kid. A retired legend who feels like a failure. A privileged young man who turns on his father.

And a stubborn girl, fighting for a dragon at dragon rider school, to make her legacy a reality.

If they don't stop the weapon, it'll annihilate the riders and their kingdom.

"The world Cota-Robles has created is a fascinating and incredible place full of dragons and magic, secrets and danger. The story contains intermissions throughout that follow the perspectives of dragons as they face their own struggles through scenes that provide a key role in how the action unfolds. Sand and Smoke is a delightful fantasy adventure that has action-packed moments, danger and suspense, humor, and two interwoven coming of age journeys." - Reader's Favorite, 5-Stars.

Click Buy Now for your next dragon rider adventure!

Enjoy reading Sand and Smoke: Dragon Destiny? You may also like these books