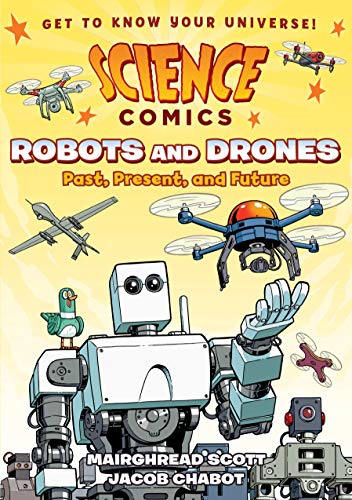 In factories! In the sky! In your cars and phones! In your own home! Robots are everywhere! And they have been for a lot longer than you might realize.

From tea-serving robots in feudal Japan to modern rovers exploring Mars, robots have been humanity's partners, helpers, and protectors for centuries! Join one of the world's earliest robots, a mechanical bird named Pouli, as he explores where robots came from, how they work, and where they’re going in this informative and hilarious new book! Ever dreamt of building your own best friend? It might be easier than you think!

Every volume of Science Comics offers a complete introduction to a particular topic―dinosaurs, coral reefs, the solar system, volcanoes, bats, flying machines, and more. These gorgeously illustrated graphic novels offer wildly entertaining views of their subjects. Whether you're a fourth grader doing a natural science unit at school or a thirty year old with a secret passion for airplanes, these books are for you!

Enjoy reading Science Comics: Robots and Drones: Past, Present, and Future? You may also like these books