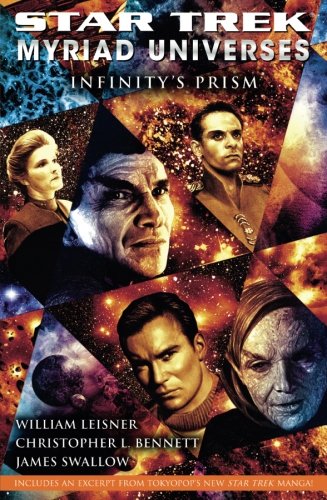 Paperback (Simon & Schuster (Pocket Books) July 22, 2008)
It's been said that for any event, there are an infinite number of possible outcomes. Our choices determine which outcome will follow, and therefore all possibilities that could happen do happen across countless alternate realities. In these divergent realms, known history is bent, like white light through a prism -- broken into a boundless spectrum of what-might-have-beens. But in those myriad universes, what might have been...is what actually happened. A Less Perfect Union: More than a hundred years after the Terra Prime movement achieved its dream of an isolationist Earth, humanity is once again at a fork in the river of history...and the path it follows may ultimately be determined by the voice of a single individual: the sole surviving crewmember of the first Starship Enterprise.™ Places of Exile: Midway through Voyager's journey across the galaxy, Captain Kathryn Janeway and Commander Chakotay must choose whether to brave a deadly war zone or abandon their quest for home. But an attack by Species 8472 cripples the ship, and the stranded crew must make new choices that will reshape their destinies...and that of the Delta Quadrant itself. Seeds of Dissent: Khan victorious! Almost four centuries after conquering their world, genetically enhanced humans dominate a ruthless interstellar empire. But the warship Defiance, under its augmented commander, Princeps Julian Bashir, makes a discovery that could shake the pillars of his proud civilization: an ancient sleeper ship from Earth named the Botany Bay.