By title
When the Cheering Stopped: The Last Years of Woodrow Wilson
By author
Gene Smith
By publisher
Morrow
Format
Other Formats & Editions
? 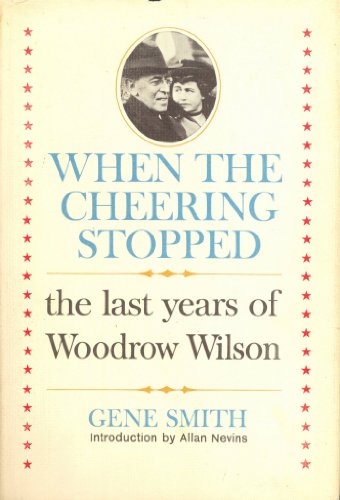 Hardcover (Morrow March 15, 1964)
The extraordinary story of Woodrow Wilson's last years in the White House and after, and the part played by his wife when the nation was without a President able to perform his duties. In the hot September of 1919, President Woodrow Wilson, his wife (the second Mrs. Wilson), his physician Dr. Cary Grayson, and his secretary Joseph Tumulty boarded the private railroad car that would carry them from Washington to California on a speaking crusade designed to persuade the American people that their country must join the League of Nations. Wilson was a man past 60, exhausted by a world war and months of wrangling over a treaty for peace. But he went among his fellow countrymen, crying aloud in a steadily hoarsening voice that unless the US embraced this League a terrible second world war would ensue. Suddenly and mysteriously the trip was cut short. Only Wilson's intimates knew that he had suffered a thrombosis and that when he returned to the White House he suffered a second attack. So begin the long 17 months when the President of the US was completely isolated from the world by his wife and his doctor. No one was allowed to see him. Senators, Cabinet officers, the Vice President, all were left in the dark, and the President's orders were scribbled in his wife's handwriting. The revelation of what actually happened in the White House during this period and what was to follow make WHEN THE CHEERING STOPPED a unique book and one that will touch the heart.

Enjoy reading When the Cheering Stopped: The Last Years of Woodrow Wilson? You may also like these books