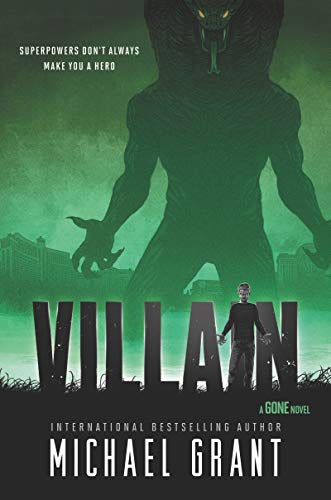 It’s been four years since the events of GONE. The Perdido Beach dome is down, but the horrors within have spread. The alien virus-infested rock that created the FAYZ is creating monsters—monsters that walk the cities and countryside, terrorizing all.

There are tanks in the street and predator drones in the sky, doomed efforts to stop the disintegration of civilization. Into this chaos comes a villain with the power to control anyone with just the sound of his voice. Dillon Poe wanted to be a comedian once . . . but everyone made fun of him. Dillon the loser. Dillon the freak. Now he’s sending thousands to their death. Who’s laughing now?

The only people who can stop a superpowered villain are superpowered heroes. Dekka, Shade, Cruz, Malik, Armo, and a new mutant with unmatched powers, are all that stand in Dillon’s way. But when the lines begin to blur between hero and villain—some begin to wonder who’s really the monster.

“Ratchets up the gore and action, and features a diverse cast of characters. An evocative, intricately plotted companion series.” –ALA Booklist

Enjoy reading Villain? You may also like these books