Atalanta and the Arcadian Beast 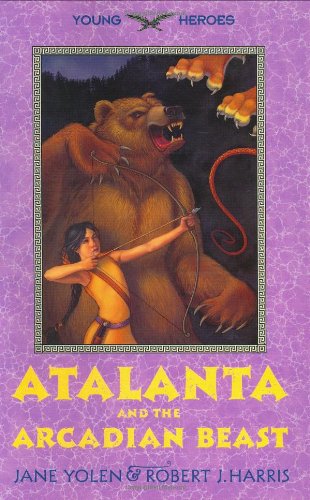 Atalanta and the Arcadian Beast

Atalanta's life has always been filled with danger, adventure, and mystery. Abandoned as a baby, she was raised in the woods by bears until she was four years old. Atalanta has never had -- or wanted -- a place in society. The woods, her animal friends, and her life outdoors are the things she prizes.

Then disaster strikes when a vicious creature unlike any other terrorizes the Arcadian countryside and destroys everything Atalanta holds dear. Her desire for revenge drives her out of the woods and on the beast's trail with the king's hunting party. Led by the arrogant hunter Orion, the expedition puts all of Atalanta's skills to the test. But assisted by her bear "brother" Urso, Atalanta proves she is as good a hunter as any man. She is not prepared, however, for the startling truths she will discover about justice, mercy, and her own destiny.

This third entry in the Young Heroes series by Jane Yolen and Robert J. Harris is an adventure story from beginning to end, portraying the dramatic events that transform a girl into a legend, and a huntress into a hero.

Enjoy reading Atalanta and the Arcadian Beast? You may also like these books