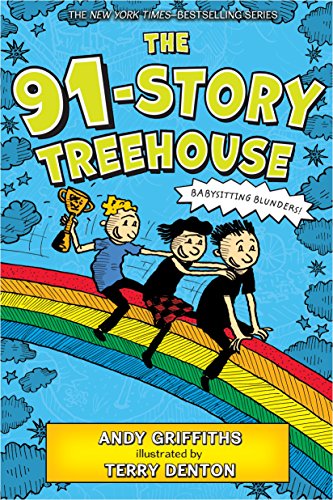 Andy and Terry live in a 91-story treehouse. (It used to be a 78-story treehouse, but they keep getting ideas for new stories!) It has a submarine sandwich shop that serves sandwiches the size of actual submarines, an air-traffic control tower, a human pinball machine, a spin-and-win prize wheel, a giant spider web―with a giant spider!― and a big red button, which they’re not sure whether to push or not because they can’t remember what it does.

Good thing there’s so many fun things to do in the treehouse, because Andy and Terry get stuck babysitting Mr. Big Nose’s three grandchildren for the day.

After all, how much trouble could they possibly get into in just one day?

Praise for Andy Griffiths and the Treehouse series:

"Will appeal to fans of Jeff Kinney and Dav Pilkey. . . . The wonderfully random slapstick humor is tailor-made for reluctant readers. . . . A treat for all." ―Booklist on The 13-Story Treehouse

"Twice the treehouse, twice the fun? You bet. . . . Denton's furiously scrawled line drawings milk the silly, gross-out gags for everything they're worth. Kids should be flipping pages faster than a pair of inflatable underpants can skyrocket the young heroes to safety." ―Publishers Weekly, starred review, on The 26-Story Treehouse

Enjoy reading The 91-Story Treehouse: Babysitting Blunders!? You may also like these books