The Bones in the Pit: Who Built the Oak Island Money Pit and What's Hidden There

By title
The Bones in the Pit: Who Built the Oak Island Money Pit and What's Hidden There
By author
Bill Thompson
By publisher
CreateSpace Independent Publishing Platform
Format
Other Formats & Editions
? 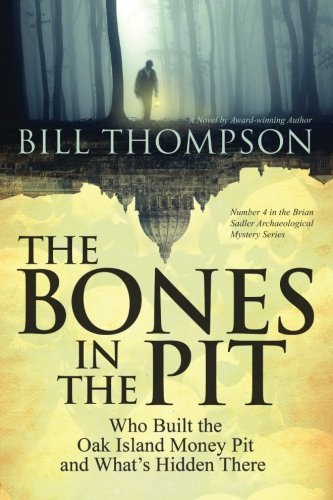 The Bones in the Pit: Who Built the Oak Island Money Pit and What's Hidden There

Paperback (CreateSpace Independent Publishing Platform July 19, 2014)
o The Pope hears the confession of a senior official of the Vatican Bank. What he learns could shake the foundations of the Christian faith. o A suicide bomber destroys a Fifth Avenue antiquities gallery. A dozen people die and an eighteenth-century manuscript is whisked away. Who went to such lengths to obtain an old Knights Templars diary, and why? o A Mafia godfather with a deadly agenda escapes from a Guatemalan prison and plots revenge on those who put him there. o A Cardinal decodes pages of ancient symbols to learn the secret of Oak Island and its enigmatic Money Pit. In 1795 three teenage boys dug in an old pit on Oak Island in Nova Scotia, Canada. They wanted to find out whose engineering expertise created a shaft nearly two hundred feet deep and if it contained treasure as the local people believed. The boys eventually gave up but syndicate after syndicate was formed over the next two hundred years to find the answer to its secrets. Millions of dollars were spent and several lives were lost in the treasure hunt. None of the searchers found riches. A mysterious rock inscribed with a symbolic clue turned up. It said, “Forty feet below two million pounds are buried.” But as excavations in the pit went deeper and deeper those backing the project faced bitter frustration. A set of elaborate traps caused the Money Pit to flood each time someone neared the prize at the bottom. Brian Sadler and a devious Cardinal of the church are pitted against each other in a race to learn secrets protected by the Knights Templars for a thousand years. A former kingpin of the New York mob, dethroned and disgraced, plans a systematic elimination of his enemies. Sadler and his girlfriend Nicole Farber become targets of the ruthless killer as this story careens to its incredible conclusion. Does the Money Pit contain relics that could shake the very foundations of Christianity? The Pope himself becomes involved as Brian Sadler discovers the startling answer to the secret of Oak Island.

Enjoy reading The Bones in the Pit: Who Built the Oak Island Money Pit and What's Hidden There? You may also like these books