By title
Avatar: The Last Airbender-Smoke and Shadow Part Three
By author
Gene Luen Yang Gurihiru
By publisher
Dark Horse Books
By series
Avatar the Last Airbender
At
Level U
Format
Other Formats & Editions
U* 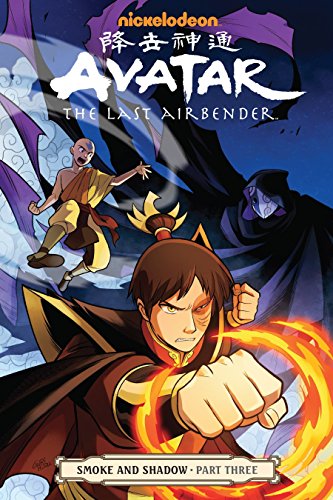 Paperback (Dark Horse Books April 12, 2016)
Children are disappearing in the Fire Nation capitol! Avatar Aang and his friends are doing everything in their power to save them--but will it be enough?!What's worse, when Azula--the mad sister of Fire Lord Zuko--appears on the scene, Zuko locks down the capitol to catch her, igniting fear and riots in the streets! Will Zuko follow in his evil father's footsteps in order to save those he holds dear?!Written and drawn by the creative team behind the best-selling The Promise, The Search and The Rift, Gene Luen Yang and Gurihiru, in collaboration with Avatar: The Last Airbender and Legend of Korra creators Michael Dante DiMartino and Bryan Konietzko, this is the ultimate continuation of Avatar and the perfect companion to Legend of Korra!

Enjoy reading Avatar: The Last Airbender-Smoke and Shadow Part Three? You may also like these books