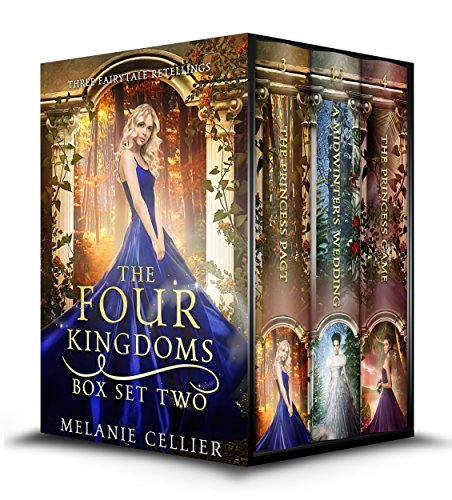 Book 3 - The Princess Pact: A Twist on Rumpelstiltskin

Spinning straw into gold was only the beginning of the story...

Marie, the dutiful princess of Northhelm, chafes under the rigid protocol that governs her life. Then a growing darkness threatens the kingdom and uncovers the lie at the centre of her whole life—a single pact that changes everything.

Throwing off convention, she joins Rafe, a handsome, charming newcomer, on a quest to save her kingdom. Except he doesn't know she has a mission of her own—to discover the truth about her identity. Increasingly drawn to Rafe's strength and good humour, Marie is torn by her double purpose. With time running out and death and destruction looming, Marie will have to unravel the bargains that surround her and choose where her true allegiance lies.

In this twist on the classic fairy tale, Rumpelstiltskin, a hidden identity is just one of the things Marie will have to unravel.

Novella 3.5 - A Midwinter's Wedding: A Retelling of The Frog Prince

Princess Cordelia is used to being overshadowed by her many brothers and sisters. So when she's offered the chance to attend her brother's wedding in a faraway kingdom, she leaps at it. In Northhelm, she'll finally have the chance to stand out. And maybe, just maybe, she'll even find romance.

But not everything in the Northhelmian court is as it appears. With her brother distracted by the wedding, only Ferdinand, the ugliest man at court, will listen to Cordelia's concerns. An observant princess and a strangely amphibious soldier may be the only thing standing between all Four Kingdoms and disaster.

Cordelia will have to overcome prejudice, deceit, and danger if she wants to save the day and find romance at A Midwinter's Wedding.

A Midwinter's Wedding is a novella of approximately 35,000 words.

Book 4 - The Princess Game: A Reimagining of Sleeping Beauty

They call her the Sleeping Princess, but Celeste is far from asleep…

Celeste has been cursed since her sixteenth birthday—just not in the way the rest of the kingdom thinks. All they see is her breath-taking beauty, marred by her foolishness. Only she knows that she retains her brilliant mind. And it’s a secret she must keep at all costs.

Over the years she’s grown accustomed to the necessary deception. After all, her life depends on it. And she’s even found a way to protect her kingdom, working from the shadows. But now a dangerous new threat has emerged, one that Celeste can’t defeat alone. She needs the help of a newly-arrived prince. One who’s altogether too handsome and too charming. Somehow she needs to keep her secret, save her kingdom, and find a way to free herself from the curse. The last thing she has time to do is sleep.

In this reimagining of the classic fairy tale, Sleeping Beauty, it’s only the princess’ mind that is asleep. And sometimes appearances can be deceiving.

If you enjoy clean romance, adventure and intrigue, then try The Four Kingdoms series now! Each of these young adult fairy tale retellings can be read as a standalone story. However, for greatest enjoyment, they should be read in order.

Enjoy reading The Four Kingdoms Box Set 2: Three Fairytale Retellings? You may also like these books