Trail of the Dead 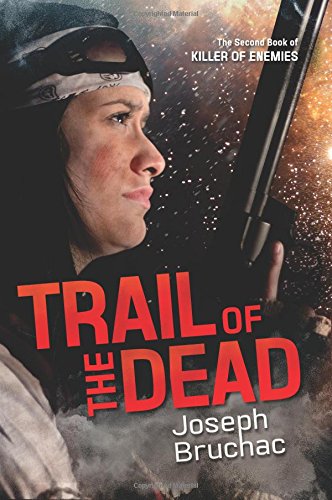 Trail of the Dead

In this sequel to Killer of Enemies, Lozen and her family, on the run from the tyrants who once held them hostage, embark on a journey along a perilous trail once followed by her ancestors, where they meet friends and foes alike.

In the sequel to the award-winning Killer of Enemies, Apache teen Lozen and her family are looking for a place of refuge from the despotic Ones who once held them captive and forced Lozen to hunt genetically engineered monsters.

Lozen and her allies travel in search of a valley where she and her family once found refuge. But life is never easy in this post-apocalyptic world. When they finally reach the valley, they discover an unpleasant surprise awaiting them-and a merciless hunter following close behind.

Hally, their enigmatic Bigfoot friend, points them to another destination-a possible refuge. But can Lozen trust Hally? Relying on her wits and the growing powers that warn her when enemies are near, Lozen fights internal sickness to lead her band of refugees to freedom and safety. Alongside family, new friends, and Hussein, the handsome young man whose life she saved, Lozen forges a path through a barren land where new recombinant monsters lurk and the secrets of this new world will reveal themselves to her . . . whether she wants them to or not.

Enjoy reading Trail of the Dead? You may also like these books