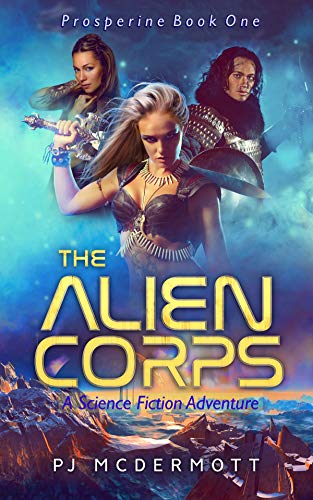 eBook (Patrick McDermott Publishing April 30, 2015) , 2 edition
The Galactic Alliance built an empire on the back of its Surfboard® propulsion drive.For decades, the G.A.'s enemies have tried to get their hands on the superior technology by stirring up dissent on remote Alliance planets. When an alien is seen performing miracles on the medieval world, Prosperine, the G.A.'s hierarchy sense trouble in the air. They enlist the help of the Alien Corps' Hickory Lace.

Hickory thought she’d never get back to the field after she messed up her last mission. Now, she’s being told to take her team to an exotic world at the galactic rim. It promises to be a tough and dangerous assignment. Naturally, Hickory jumps at the chance.

Prosperine is an exciting "sword and planet" series with likable characters, brave deeds, and intriguing aliens. If you enjoy the classic scifi works of Asimov, Herbert, Heinlein, and Anderson, download book 1, The Alien Corps today and begin a new adventure.Prosperine: A Science Fiction Adventure comprises: