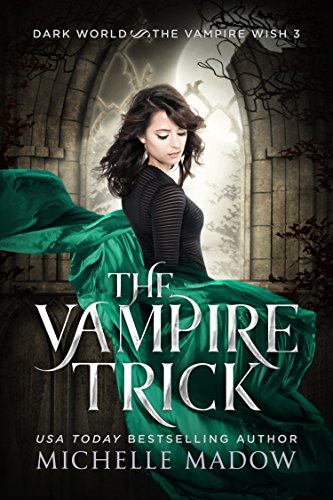 language (Dreamscape Publishing Sept. 7, 2017)
In a kingdom full of secrets, no one can be trusted.

Annika’s life was flipped upside down when she was kidnapped by vampires to become a blood slave in their hidden kingdom of the Vale. Now, the powerful witch Geneva has disguised her as a vampire princess, and Annika’s living in the palace to compete for Prince Jacen’s hand in marriage. But her quest to become his bride is just a facade. Her real goal? Kill the vampire queen Laila so the kingdom crumbles and she can set the human blood slaves free.

When rebellious wolves attack the town, they leave a trail of vampire corpses in their wake, declaring war upon the Vale. But the wolves didn’t act alone. Someone on the inside is helping them, making everyone a suspect. And one major player won’t make it out alive.

Return to the mysterious, magical world of the Vale in The Vampire Trick and get ready for a major twist you’ll never see coming!

"**Warning** This series is highly addictive and will consume your days/nights reading it!”
-Nicole, Goodreads Reviewer ★★★★★

Enjoy reading The Vampire Trick? You may also like these books