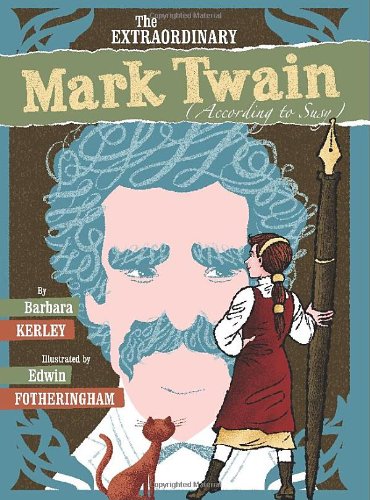 Hardcover (Scholastic Press Jan. 1, 2010)
From the Boston Globe-Horn Book Honor-winning team behind WHAT TO DO ABOUT ALICE?, a humorous and intimate portrait of the most celebrated writer in America, as told by his thirteen-year-old daughter.
"This is a frank biographer and an honest one; she uses no sandpaper on me." - Mark Twain

From the award-winning team behind What to Do About Alice?, comes a humorous and intimate portrait of the most celebrated writer in America, as told by his thirteen-year-old daughter.

Susy Clemens thought the world was wrong about her papa. They saw Mark Twain as "a humorist joking at everything." But he was so much more, and Susy was determined to set the record straight. In a journal she kept under her pillow, Susy documented her world-famous father-from his habits (good and bad!) to his writing routine to their family's colorful home life. Her frank, funny, tender biography (which came to be one of Twain's most prized possessions) gives rare insight and an unforgettable perspective on an American icon. Inserts with excerpts from Susy's actual journal give added appeal.

Enjoy reading The Extraordinary Mark Twain? You may also like these books