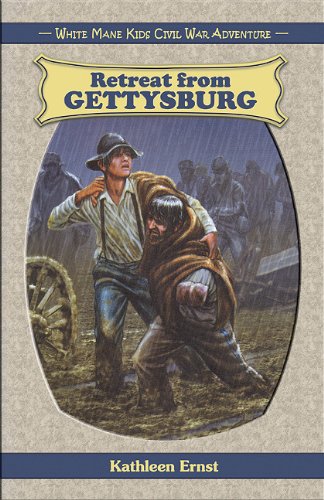 Paperback (White Mane Kids May 27, 2010)
Chigger O'Malley, of Williamsport, Maryland, is happy when rains and floodwater trap Robert E. Lee's army after its dismal retreat from the battlefield at Gettysburg. His father and three older brothers, all members of the Union army's famed Irish Brigade, have been killed in battle. Chigger hopes the Union army will attack the withdrawing Confederates and end the war. But when events force Chigger and his mother to care for a wounded Confederate officer, the issues of right and wrong, of friend and enemy-become more difficult to answer.

The tense week after the Battle of Gettysburg provides the backdrop for this suspenseful tale of self-discovery as Chigger decides whether or not to leave his widowed mother to fight for the Union.

This book contains period photos and illustrations, an author's note, and lists of educational activities and additional resources.

Enjoy reading Retreat from Gettysburg? You may also like these books