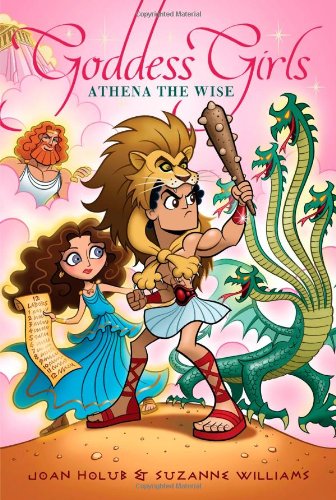 Paperback (Aladdin April 5, 2011) , Original Edition
These classic myths from the Greek pantheon are given a modern twist that contemporary tweens can relate to, from dealing with bullies like Medusa to a first crush on an unlikely boy. Goddess Girls follows four goddesses-in-training – Athena, Persephone, Aphrodite, and Artemis – as they navigate the ins and outs of divine social life at Mount Olympus Academy, where the most priviledged gods and goddesses of the Greek pantheon hone their mythical skills.

In book 5, Principal Zeus asks Athena to help Heracles (aka Hercules in the Roman pantheon) complete his twelve labors. But when Heracles starts borrowing Athena's friends things without asking, will she be able to help him set things straight?

Enjoy reading Athena the Wise? You may also like these books