The Goddess Girls Set: Athena the Brain; Persephone the Phony; Aphrodite the Beauty 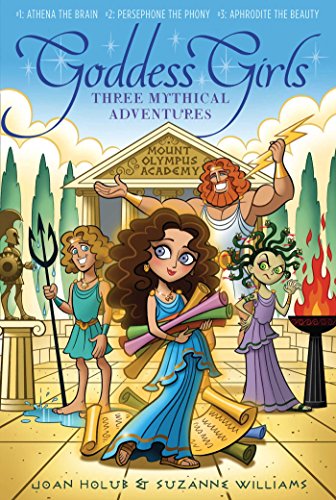 The Goddess Girls Set: Athena the Brain; Persephone the Phony; Aphrodite the Beauty

language (Aladdin July 26, 2011)
Goddess Girls follows four goddesses-in-training – Athena, Persephone, Aphrodite, and Artemis– as they navigate the ins and outs of divine social life at Mount Olympus Academy, where the most priviledged gods and goddesses of the Greco-Roman pantheon hone their mythical skills. In each book, readers get to see how each goddess became who we know today. These much-beloved classic myths are given a modern twist and follow storylines familiar to modern tweens, from dealing with bullies (Athena and Medusa) to first crushes (Persephone and Hades).

Athena the Brain follows Athena's first days at Mount Olympus Academy. She always knew she was smart and special, but she didn't realize that she was a goddess! When she's whisked away to MOA, she worries about fitting in and dealing with her dad (Zeus). Luckily, she meets the Goddess Girls and finds the best friends she's ever had.

In Persephone the Phony, Persephone develops a crush on bad-boy Hades. Her mom (Ceres) doesn't approve, and neither do her friends. Persephone finds herself sneaking around to see him, but he ultimately tells her that she should tell them the truth and it's revealed that he isn't all that bad, just misunderstood! The GG support her and eventually her mom comes around too.

Aphrodite the Beauty features Aphrodite, goddessgirl of love, as she deals with jealousy after giving Athena a makeover (godboys pay more attention to her!), and dealing with a crush from an unlikely place -- the nerdy Hephaestus (god of the smith).

Enjoy reading The Goddess Girls Set: Athena the Brain; Persephone the Phony; Aphrodite the Beauty? You may also like these books